Night and Day – the ultimate romantic comedy with a playlist! 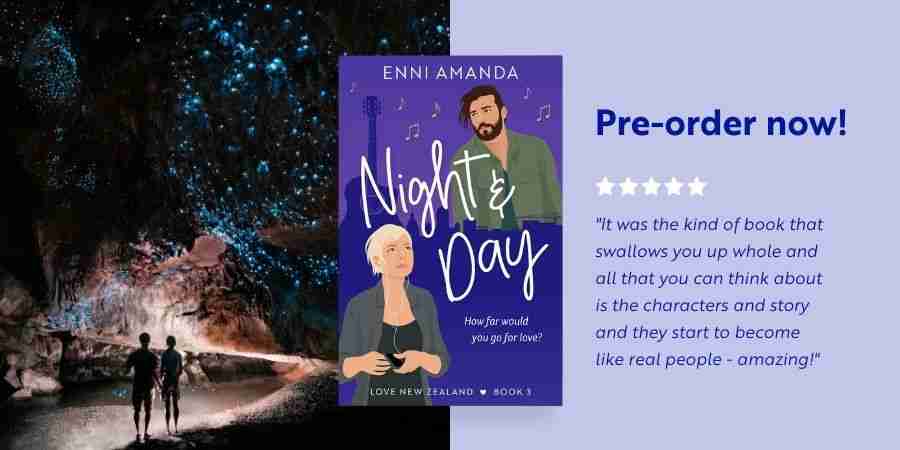 This steamy romantic comedy comes out on April 1! On the same day, my sister Aini will release a song to go with the book – a song that actually features in the book. The book also has its own Spotify playlist with oodles of amazing indie music.

She lives on the other side of the world. He doesn’t go beyond the corner store.

TV producer Mia is torn between her work ambition and passion for songwriting. Facing a huge career choice, she embarks on a round-the-world trip to find answers. Soul searching turns into a nightmare when she’s robbed. Stuck in New Zealand with only a guitar on her back, she calls the one local she can think of: an editor she once hired via email.

Izzy spends his days in his basement, working on an ambitious film project. His family wants him back on the dating scene, but Izzy prefers imaginary realms to real people. He’ll join the living when he’s reached his creative goals. Probably.

When Izzy’s solitude is crashed by a woman in trouble, he can’t resist the call to help. Having a fleeting visitor gives him an idea – a fake relationship with Mia will get his family off his back. In return, he’ll be a good host (nothing more) and show her New Zealand is not a crime-infested hellhole. He’ll just have to ignore the instant attraction and creative sparks that fly when they’re in the same room, or boat, or… cave.

Their chance encounter changes everything, but how could it ever work? Mia’s whole life waits for her in Helsinki, while Izzy struggles to leave his basement. They’re night and day. Unworkable.

Opposites attract, but how far would you go for love?

—
This is a steamy romantic comedy, featuring: